Swimmin' in the rain

Looking through the results from Freshwater today, we notice there were 47 punters who entered this swim, but apparently didn't turn up. That's 47 no-shows, or 13 per cent of the field who entered online. How could this be?

It was a dark and stormy night, sort of, and a grey and rainy day. There always are some punters who, for whatever reason, don't bother or can't make it on the day despite their best intentions. Rain makes for more of them, of course. After one swim last season that was run on a threatening, grey day – but not rainy, as it turned out – one mug emailed us seeking his money back because, he claimed, he'd got the date wrong after being misled by oceanswims.com. Sure. More like, he woke up to find a grey sky and couldn't be bothered getting out of bed, so he thought he'd try it on. As it turned out, the day was quite noice.

Before today's swim, we tweeted a pano of the sea off Freshwater as a rain front moved in. It was pure drama, a heavy curtain of thundercloud – well, it looked like it could have been thundercloud – descending on the stage that is Freshwater, like a proscenium arch lowering ominously on a poorly received play.

It was foreboding, of something. Shortly after, another punter tweeted a pic taken at Freshwater beach, of a grim scene beset by rain. "Not the best day for an ocean swim," the tweeter tweeted. It certainly looked that way.

But it was interesting to see that this punter tweeted again, this time after the swim, with the same grim pic, but this time the comment, "Rainy but fun swim today at #FreshwaterSwim Water was so warm and clear!"


And that's the wonderful thing about days such as these: All those punters who woke this morning and, to grey, ominous and spitting skies, rolled over and went back to sleep, missed the joy of swimming in the rain.

You're going to get wet anyway, of course, but there still is the run down the beach -- a jaunty, gay gambol prior to the race -- to the start line and the schlepp back up after it, inevitably less energetic, not to mention the issue of where you leave your stuff. Freshwater is good like that: the club throws open its doors and welcomes us mug punters in: it makes its auditorium available for gear stowage. So, no worries about what happens to it during the swim.

There's also the issue of the storm water drain at the northern end of the beach, just next to the start line. On a day like this, there's always a flood of flotsam emerging from the drain, despite the grills at its exit. In the runout in that northern corner, it doesn't hang around long and whooshes out to sea, just as we swimmers do once we're in it. We didn't spot much apart from a few leaves tody, though. Freshie organiser Linda Wiadrowski reckoned that was because Friday's rain cleaned up the streets and it's all gone by now. There certainly was little evidence of nasty stuff in the sea once you got moving.

Indeed, the water was clear. We had the most evocative view of weedy, corally rocks as we glided over them, outwards, outwards towards the ocean, sometimes in water less than a metre deep, the swells swirling around the rocks and pushing us gently back and forth. Even way out past the pool, even past the point, we wafted over the rocks and weed, in water amongst the clearest we've enjoyed this season.

We remarked on this last week after Bondi: about how clear was the water. It continued, despite the rain, at Freshwater, which could have been Clearwater. (Perhaps the locals could get another petition going to change the name again.) 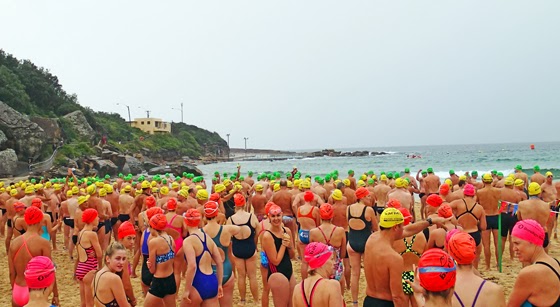 Every season has a clarity peak. We remember the Cole at Manly a few years back, when the water was so clear there seemed nothing between you and the bottom. At Manly! Deep ocean outfalls have done wonderful things for the beaches nearest the city centre. Every now and again, you get such days, usually when least expected, and that makes them all the more satisfying.

It is a remarkable thing that the water on rain days so often is very clear, just as it's also often very warm. We don't know the temperature today, but it would have been around 24C. Did anyone have a thermometer on their persons, who could tell us? Sometimes, this is a comparison thing, that the water seems warm because, on a rainy, chilly day, it's warmer than the air temperature: it's warmer in than out. Today was so warm, the sea so comforting, that it was being like wrapped in your favourite blanky when you were a little kid, and on those cold winter mornings, you just didn't want to get out of bed. It was comforting, and reassuring, and you felt secure.

It takes a day like today to produce these conditions. The heavy cloud and the rain evens out the light, so you don't have the extremes or the harshness of light that makes the southern hemisphere light usually so different from the northern hemisphere. There was little wind, too, so the water was smooth, but with a swell rolling through, the bigger as you got farther out to sea. But that meant that the wind – and there was no chop – left the water unshaken, not even stirred, so it remained clear. The even light above the water surface meant you had even light below the surface, too, enhancing the clarity.

Mrs Sparkle remarked to a friend that the water was so nice, she didn't want to get out. We felt a bit like that too, as we did at Bondi. Sure, it rained, and the clouds threatened doom, but what a lovely swim we had. And the 13 per cent missed it. Some people have no idea.

And a footnote: We told the story in our weekly email newsletter of John de Mestre, the Freshwater member who won the first inaugural Barney Mullins Classic, run 23 years ago when John was 28. John won the 20th, too, when he was 48, and whom do you think won again today, now 51? Yes, him again. And when we say, he won, we mean, he won outright. Not just his age group. The whole shebang. His dad would have been proud.

At the preso, de Mestre made a comment about his dad, who passed away last year. And he said a few words about Barney Mullins, in whose memory the swim is name. Barney Mullins taught de Mestre, and many other high profile names, how to swim in the surf and the sea. He taught me, de Mestre said, where to swim and how to swim according to which way the sea was running: how to read the sea and use it to your advantage. "He taught me how to swim smart, not just hard," he told the crowd. 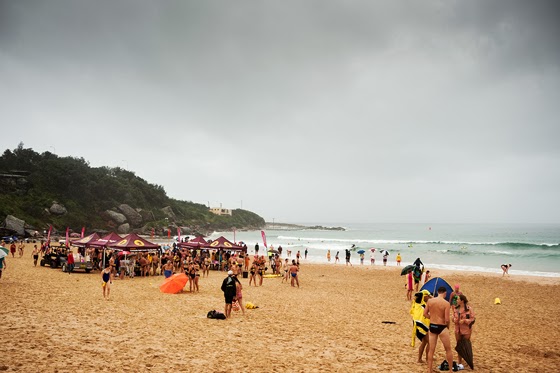 See our more complete report on oceanswims.com of both Freshwater at the Melbourne Swim Classic... click here

Tell us what you thought of your swims over the weekend... Write in the comments field below...
Posted by os.c at 10:28 PM 1 comment: