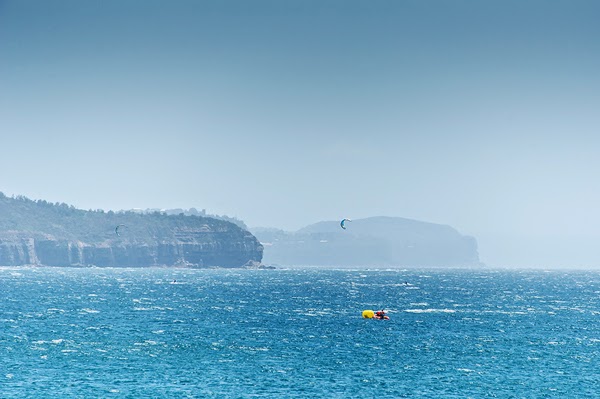 What is it that brings me back to loving oceanswimming every season? Something different can happen at any swim and usually does.
Today was the first ocean swim of the season for me, and as every season starts it is great to see all those old familiar faces and catch up with everyone’s stories of holidays, future plans and training, or lack thereof, over the cooler months.
Collaroy put on a nice, flat, sparkling sea, friendly clubbies and the sun was out. The water was warm enough to be comfortable. I would like the water temperature turned up just a tad for future swims, though.
On arrival, I couldn’t help but notice the thick lining of seaweed on the shore. I am certainly not a fan of wading through weed. I always imagine there is something nasty hiding in it. os.c doesn’t help, as he reckons this is where small stingrays hide, just waiting for you to step on them.
On the start line, I decided to start behind one of the men, in the vain hope they would part the seaweed and I would slip through unscathed. I chose to start behind Colin. He who is brave enough to anaesthetise an adult tiger surely would protect me from what lies below the weed.
It didn’t exactly go to plan, but I got through with only a few squeals and before I knew it I was in that starting throng vying for a clear line to the first booee. All continued to go well for me. I recognised a few of the swimmers around me and I knew if I could see them I was doing pretty well.
The run down the back leg was a true delight, until disaster struck. There I was, heading for the final booee of the four, right on course and felt like I was knocking off I few spots along the way. I sighted the booee and swam another 20 meters, looked up to sight again, and to my horror, it was gone. I noticed half a dozen swimmers in front of me had stopped and then all of us noticed at once the booee was on a rubber ducky rapidly passing us and going back to where we had come from.
There was not only disbelief but quite a bit of language I probably should not repeat. It was certainly disheartening to see about 40 - 50 swimmers who were once behind you suddenly turn around the newly placed booee and then head in toward the beach in front of you, while you have been madly chasing down a rubber duckie. It brought back memories of a few Cole Classics at Manly, when they moved the booee mid-race.
We did manage to pass quite a few of these swimmers on the run back to the beach, but not all, so I imagine there will be some unusual results from the 1.5km swim.
To finish off the swim, I knew that weed would be waiting for me, and sure enough I think it had doubled in the time between start and finish. My plan this time was to “man up” and just plough through it. Easier said than done! At one point I thought I would be stuck there forever. It was so thick I couldn’t swim through it and when I stood up I couldn’t make much progress through it by trying to walk, either. I was just stuck there not being able to lift my legs through it.
Others seemed to be making better progress than me and eventually a little wave moved me and it in closer to the finish where I eventually was able to make some forward progress. Oh, the relief!
Of course, there was lots of chatter around the finish line about the moving booee. There were some who were annoyed, some who were bemused, and some who were blissfully unaware of what had taken place.
Like many, I chattered with a few mates about this in the outdoor shower. os.c was a little behind me in the queue for the shower, and as I rinsed myself down, the bloke in front of him said, “Get a load of this… In the shower, and she’s still talking!” And…? This fellow obviously hasn’t encountered me before.


Even ocean swimmers have flaws.