Lovely day, but bludgers were afoot

We weren't there, but we hear the Island Challenge at Coogee was a lovely day, but we expected it would be. From our bolthole, cosseted in an oasis of greenery in Sydney's inner east, gaoled, we could see the sky, we could feel the breeze, and we could smell the late spring air. Typical Coogee, we thought. And from all accounts, it was. 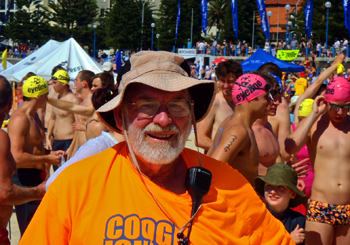 Our cobber, Murray Cox, looking for something of a flagship nature to do this season, is to be the male lead in a Tropfest movie about insomnia. Murray was at Coogee early -- he couldn't sleep -- and sent us a few pics of punters on the beach. We have no idea whom these punters are -- apart from  one of them -- but, since Murray was kind enough to send them to us, we feel we should acknowledge and use them. As for Murray's movie, Insomnia, his producer/director will be appealing very soon for supporters -- $10 a pop will get your name in the credits, for example -- so we'll let you know and you, too, can become a movie mogul. The bottom line is, if they don't get enough supporters, they won't make the movie, which is a bit extreme, we'd have thought.

Anyway, most of the accounts we heard from Coogee were positive of a smoothly run, friendly event. The only slightly negative bit of feedback -- apart from the heel wafting of one recidivist of which we heard -- was of the presos conducted in the surf club. One punter told us they were terrific, whilst another told us they weren't. We have to say, any presos conducted inside a surf club immediately exclude the bulk of the entrants, who don't feel able, for one reason or another, to go inside just in case they win a random draw.

Speaking of heel wafting, Mrs Sparkle was the victim of one, but she also tells us she swam past another woman heel wafting on some bloke, who seemed to have his heels painted with bright stripes, targets, perhaps, so she could find him?

We've said it before, and we shall keep saying it: heel-wafting -- drafting -- is cheating; it's bludging. There is only one reason to draft, and that is to get around the course under someone else's steam. The leader effectively drags the heel-wafter along behind. There's only one person really trying: the leader. The heel-wafter is bludging, using the lead swimmer's effort to get much of their speed. They do it in triathlon, but they're an eccentric bunch in that sport, spending thousands just to be a part of it in the first place. They do it in elite open water swimming, but they also generally take turns leading at the elite level, so that everyone does their bit, much like cyclistes.

Otherwise, we're told, Coogee was a lovely day. We heard noice reports from the Killer Swim in Mur'bah, too, and from Redcliffe, where the Great Australian Swim Series had another outing. Whom of you swam where? Tell us abart it...
Posted by os.c at 4:52 PM