Magic at Malabar, Half Moon in Vic, full moons at Cobblers 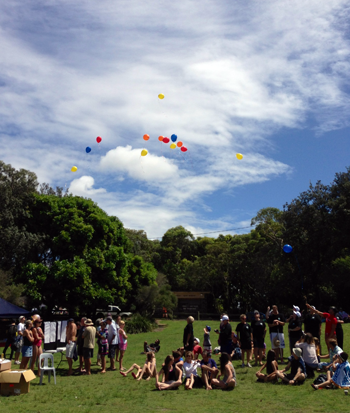 How do we rise on a Sundee morn to find cloud covering the blue bits in the sky? Quite often. But how often do we then get to the beach to find the sun burn off the cloud and the glory of a Sydney summer emerge? Almost as often. So it was today at Malabar, with Murray Rose's Malabar Magic. Organiser Rob Lloyd remarked during a remembrance ceremony for Murray that he was there, watching down on us. And so he might have been, using his sway with whoever might be upstairs, if anyone -- it might just be a rag-tag mob of spirits just like all of us with no-one in charge -- to give us a glorious day.

And it was a glorious day. The beauty of Malabar is that it's a terrific beach for new swimmers to get a feel for the water. There's no break, it's generally straight into swimmable water, and it's wide, flat, open and gentle. There was a bit of roll as the peloton moved seawards, but what do you expect? Let's hope the organisers shift the start/finish away from those rocks next time. It was perilous.

A report in The Sydney Morning Herald from Cobblers Beach, where the newd swim took place, said it was a lovely day enjoyed by all, whilst other reports were critical: "...the swim organisation was atrocious," tweeted Wett One Lindy Woodrow. No detail yet, but perhaps that will emerge from Murray Cox, who paddled over to Cobblers with his Go-Pro to video the swim. We're looking forward to Murray's report.

Half Moon Bay, the Cerberus swim, in Port Phillip Bay on Sat'dee, had a very nice day, too, according to our entrist, @KAOSVIC. Rockingham and Mandurah ran in the West, Auckland in NZ, Henley in SA and Mooloolaba in Queensland... What did you think? Click the Comments link below to tell us...
Posted by os.c at 4:34 PM