The best kind of water 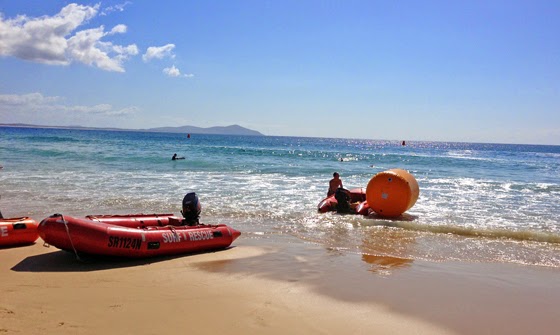 Long road trips can lead to profound revelations. On the way back from Pacific Palms on Easter Sundee, Mrs Sparkle said, suddenly, “You know, I like swimming in the ocean the best. It’s the best kind of water”.

Well, yes. That is one of the reasons why we get up to this caper.

But there is background that’s relevant: for the last couple of months, Mrs Sparkle has been undergoing a transition in her life: a nurse by training, she has become a learn-to-swim teacher, and she’s found herself heavily occupied in teaching some of the youngest kiddies of Ryde municipality to not drown in water.

That means she spends a lot of time in water indoors, in pool water, at Ryde Aquatic Leisure Centre. A typical shift involves three and a half hours in the pool, classes turning over every half an hour. That’s as many as seven classes over the shift, perhaps 25 to 40 chillun over its course, the only variations being slight skill levels of the urchin pupils and the lane to which Mrs Sparkle’s class is allocated in any given half hour.

It means she’s at least waist-deep in chlorinated “fresh” pool water for three and a half hours, and often deeper when she demonstrates what she’s telling the little kiddies, interspersed with repartee that reminded us of the contract that Kirrawee Primary School headmaster Bill White – the first Stra’an yoof to be gaoled for resisting the draft in the Viet Nam war years – offered us on the first day of school for oceanswims.com jr 1: “We’ll believe only half what we hear goes on at home,” said Bill, “If you believe only half what you hear goes on at school”.

Leading up to the Easter holidays, one little kiddie in Mrs Sparkle’s class told her, “We’re going on a camping holiday over Easter, but it’s only pretend camping”. “Oh, really,” said Mrs Sparkle back. The family had booked a cabin at a caravan park, it turned out.

The point being that Mrs Sparkle, a regular squad swimmer at Crummy Drummy, and a regular with an informal squad of laydees at Ryde, known as The Sunrise Sisters, was spending a lot of time these days sub-consciously and consciously comparing pool water with ocean water.

Any laydee will tell you that pool water is no good for the skin. Misnamed “fresh water”, because it’s absent natural “salt”, pool water is loaded with other chemicals, and germs, that ocean water often doesn’t have. There might be a rash of gut infections that razes the population of a pool, or an outbreak of tinea or plantar warts. And certainly there are other salts in the pool water added surreptitiously by unknowing little children whose parents haven’t been careful enough before delivering them into the pool, and by grown-ups who are just too lazy. The chemicals are added in an effort to check such out breaks and contagions. But it does things to the skin: it dries out the skin.
Learn-to-swim teachers also wear clothes in the pool when on duty: wetties and rash shirts as well as cossies. It’s to protect them from the cold, mainly, but it also creates conditions, we’d have thought, it which the colonies of things that thrive in pools can in turn thrive close to their bodies.

Mrs Sparkle is one of those laydees who comes home and immediately washes herself thoroughly then soaks herself in some kind of cream or lotion, generally with a pleasant scent. She complains about the drying effect of chlorinated water on the body, the smell, of which they try fruitlessly to rid themselves, Eau de Chlorine, and the effect the chlorine has on their clothes, particularly on their wetties, which cost learn-to-swim teachers considerable and frequent amounts of money with no recompense from their employers.

Our experience with chlorinated, indoor pools is not as fraught as Mrs Sparkle’s but we’ve had our moments, particularly at Ryde. We used to train there with a squad early morning several times a week. We then would spend squad day congested with blocked airways. It wouldn’t happen to us at other pools, and it wouldn’t happen to us at outdoor pools. But it always happened after a session in the 25m training pool at Ryde, which is where Mrs Sparkle delivers most of her lessons. Strangely, it doesn’t happen to us in Ryde’s 50m competition pool. But there you go.

Anyway, Mrs Sparkle has these considerations on her mind constantly these days, since she started teaching learn-to-swim. The issues associated with spending so much time in an indoor, chlorinated pool are on her mind constantly, and they’re presented in stark relief when she swims in the ocean, especially in ocean water that’s particularly good.

Such as Pacific Palms was on Easter Sundee.

The seas were enormous on Easter Sat’dee. They were so big that the Pacific Palms awgies were prepared to move the course around to Wallis Lake if Sundee dawned as fierce as Sat’dee. Coincidentally, all three swims in NSW over Easter were on those gems of beaches: north-facing. This means, they missed the worst of the weekend’s swell which came from the Sarth to East Sarth-East. Culburra, near Nowra, was a bit different, in that its programmed course, around Tilbury headland, was very exposed to the sea, but Tilbury Cove, on the northern side, sits in the lee of the headland and offers a sheltered alternative in the ocean. Culburra is at the closest point on the eastern seaboard to the edge of the continental shelf.

But the Almighty works in mysterious ways, and Easter Sundee dawned pacific and bright at Elizabeth Beach, home to Pacific Palms Surf Life Saving Club. The swell had gone. It was calm, clear, and gentle.

lizabeth Beach, facing nor-nor’ east, usually offers what look like benign conditions, but as soon as there is any kind of swell, it develops a dump onto a bank which can be quite nasty, even dangerous, if one is not careful, particularly as the tide drops.

But there was nothing like this on swim day. Start time was just a few minutes ahead of the high, 1.3m due at 12:03. It was a very low high, but it meant there would be some water over the bank. The glory was in what we found when we got into the water.

Heavy seas churn up the bottom, making the water turbid. But by swim morn, it was all gone. You could almost count the grains of sand on the bottom, the water was so clear. And it was warm. And, in April, the worst of the stingers and lice usually have gone, so there’s rarely anything in the water, apart from water, to cause any discomfort. Well past summer’s peak, even the sun is relatively benign on Easter Sundee.

We’ve had a run of good water the last few weeks, despite the frequent heavy seas that have led to the worst rash of swim cancellations this season in our experience.

But there were no confounding chemicals in the ocean at Pacific Palms. The sea was gentle, the water calm, walm, and supportive filled with the natural salt that makes us – especially us boofheads – far more buoyant than in a chlorinated fresh water pool. It was a delight to be in.

So, on the three and a half hour drive back to Sydney, it led to Mrs Sparkle’s greatest accolade. As if we hadn’t known it already.
Posted by os.c at 3:03 PM