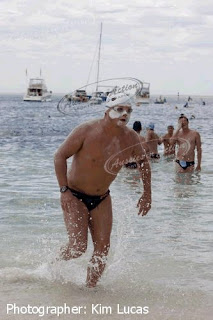 Perth had the Rottnest Channel Swim (on Saturday, Feb 21). This year the event attracted a great turnout with about 2,000 competitors including a large number of four person teams, duo's and almost 180 solo swimmers.
The weather forecast leading up to the event was good and predicted to be c. 34.0°C, but in the end turned out to be closer to 40.0°C. Hot days favour this event as they bring with them a nice easterly that pushes the swimmers and support boats over in the direction they are heading . . . towards Rottnest Island!
Left: there is little like stumbling out of the water after nearly 7 hours and try to get the ankles to flex again!!
My thoughts early on in the morning before the start were that it looked like a pretty vanilla day, should easily get over in less than 6hr but could push to try and get down around 5h30m. But in the end the day turned up a very big surprise and my final time was closer to 7hr.
The first half of the course all went well and was covered in less than 2h45m. The breeze was pushing us along nicely and some small waves slapping us along also. Visibility was great and could see the bottom the whole way across, even through Gage Roads Shipping Channel. It was at about half way across though that the water went cold; it wasn't the temperature of the water however that was the bother but what was bringing it.
For just less than the 2nd half of the course it seemed that we were virtually heading straight into a current. Being able to see the bottom provided an indicator of progress being made for each stroke . . . not much! As we got closer to the island progress still got slower and slower.
My previous slowest time (6h43m) was in 2006 when the weather was terrible and swimmers had to negotiate their way through something like 15kt winds and a 1.5m swell. Just as you can't judge a book by the cover so too you can't predict your time for a swim by looking at the wind and waves alone.
Mother nature can be both subtle and obvious when demonstrating her power; yet obviously this still was nothing compared to her absolute power. I requested our crew to stick to the south of the course as this is usually the best tactic as the current around 4km to go swings you around back on course. Speaking to other swimmers and skippers afterwards though it seems that those who kept slightly north didn't get bogged down in the current nearly as mush as those that went south. On any other day sticking south would have worked and if I had to swim again tomorrow I would be hard swayed to change the request.
Another interesting component of the day were the stingers. You don't normally come across these once offshore but this year I would hazard a guess that they were confused by the different current. I hit my first stinger about 55 mins offshore and it almost made me walk on water. I must have struck it straight in the middle so that it stung me down the face, wrapped around my neck, over the shoulders and then a nice zap perfectly symmetrically across both shoulder blades just for good measure. With the knowledge that the stingers were today offshore it kept me (like other swimmers) on edge in anticipation of the next one; I would then only get stung again the moment I managed to forget they were there. It is a mystery to me as to how this specie of creature survives; just like a hot electric fence I can't imagine purposely going near something that is going to zap me without remorse, no matter what the reward.
I was pleased to have finished but initially disappointed with my result. But with some disappointment comes some consolation. I had only trained properly for about 4 weeks and was relying mainly on some muscle memory from previous training last year. But enough excuses because another factor that I hadn't initially thought of until speaking to my Mum was that I am getting older . . . (I am only 37?!) . . . the trouble with this is that I am not sure what I can do about it?! But really the answer is that the quality of the competition has increased with more great new talent joining the event each year; so as long as I keep on making it across in one piece. I will still be content with that, what I lack in quality I will make up with quantity.
So anyhow that was my 9th solo crossing, I didn't quite get to my personal best but did set a new personal milestone for being able to stick it out longer than before (code for a new longest time taken for the event) and finish in 6h52m.

Once again the Rottnest Channel Swim Association conducted a great event and from my point of view the day seemed pretty seamless. The presentations went well and calling each solo swimmer up on stage in finishing order still seems a good way of receiving our trophies.
But the other great part to the presentations is the sideshow of the final solo swimmers limping in (with three flat types and smoke billowing out of the bonnet - no offence, this honestly amazes me), after almost 12 hours in the water. I have seen this courage and commitment a number of years now and it still makes a little salt water well up in my eye. What impresses me is seeing someone wanting something so much that they were never going to give up.
Now looking forward to Rottnest 2010 and hope to better this years time and get my average back down!!