Just back from Malabar, which is a pretty cove, also known as Long Bay, in Sydney's south-eastern suburbs. Water was glorious, perfect even, apart from the fact that there were no waves at all. At all. It was a pool swimmers' swim. Flat, even, little current, clear, clean water, not even stingers -- ah, yes, one punter was stung by a bluey at the outer reaches of the 2.37km course. But that's not much, for the rest of us. Sorry for the punter, however.

It was stiflingly hot, too. Stiflingly. Race organiser Murray Rose promised us a southerly at 12 noon. And during the longer swim, as we stood in waist deep water, we felt a sou'-easter waft around our face, tantalisingly, teasingly. It was so stiflingly hot. Water temp c. 23C. Noice.

In water like that, there's not much point us sitting on turning booees out in the sea taking pitchers o' punters schlepping around the course. After we'd observed the starts, they all were gone, and there are only so many images of swimmers in flat water one can see before one screams. So we shot video again, and this time, for something a little different, we decided to focus on stroke technique. Not as a class, but as a demonstration of the vast array of strokes on display in an ocean swim. If there are 880 swimmers in a swim, as there were today, then there'll be 880 different strokes. Some of them weird, some of them wonderful (you work out which is which). Anyway, we'll post this video on our report page on oceanswims.com later tonight (Sundee). 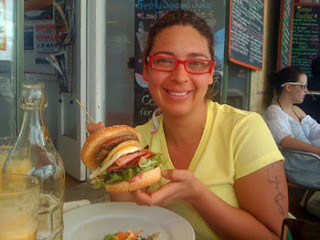 Hard to believe Malabar/Long Bay used to be one of Sydney's most polluted beaches, with the Malabar sewage treatment works pumping out the nasty stuff just around the point for so many years. The deep ocean outfalls changed all that, however. Now the nasty stuff is spread more widely, and comes in at Cronulla, albeit in far weaker strengths.

It's a long day. We left Casa Sparkle at 0700, and returned at 1600. It's a long day. But we took a bit of extra time afterwards to show our new friend, Aida, who's Mexican now living in Belgium, around the eastern suburbs. Aida -- first person we've met with an opera named after them -- is a friend of Shelley Clarke from the FINA world open water circuit. Aida picked up 1sts in her age group in both the 1km and the 2.37km today. That's Aida above. We had lunch in that cafe strip at Bronte. Aida ordered an "Aussie Burger", and couldn't believe the size of it. "How do I eat it?" she cried. No wonder we're going the way of the Americanos el Norte with obesity in Stra'a.
Posted by os.c at 4:40 PM