Folks… this is a tale of a little swimming interaction I had at a pool in Brissy. I’m telling this tale because I think it is food for thought for swim organisers, when designing a swim course of any kind, to spend some time thinking about collision.
So, back in May, I was up in Qld for work. As usual, I pack the swim gear to get a swim in where ever. I normally venture to the Centennial Pool at Spring Hill if I am up that way, but decided I’d give Fortitude Valley a go. When I arrived, lanes were set out by pace, and normally, I’d pop in the Fast Lane, but there were a bunch of people swimming with flippers, slowly. So I jumped in the “Medium” lane, only to learn how frustrating it is not to be in the fast lane. On this day, I had forgot to pack my defog spray for my goggles, so didn’t have the best clarity of vision, which I don’t have anyway. Having tailed some fella for a lap, I decided to overtake him, only to discover there were two of them, and a swimmer coming the other way. Like the urban rev-head, I had put the foot down. However, I didn’t see the swimmer coming my way until my index finger made contact with his massive scone during my extension stroke. In response, I quickly pulled my hand out the way, apologised, and carried on. 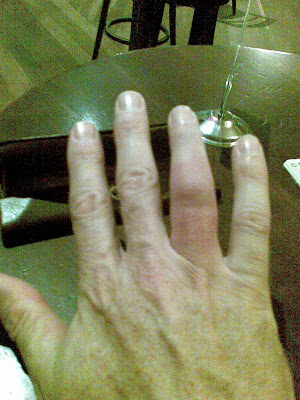 So off to work, and the conference, where I realise I can’t lift the coffee pot. By the end of the day, the joint was swollen but could be relieved by holding onto a cold ale. For some reason, probably a male thing, I did not see a doctor for 2 months. When I decided to go, so began the referrals. Doctor says – “you need an X-ray”; take self for X-ray; return to doctor – “you need to see an orthopaedic surgeon”, referred to surgeon; surgeon refers me to CT scan and ultrasound, return to surgeon with imaging; "you need to see a hand surgeon", hand surgeon says “inoperable”, refers me to sports physio, two visits to physio. Now, 9 appointments, 13 total hrs and $590 later, I have given up to let nature take its course.
In clocking this guy on the head, I had taken an 8mm chip off the joint in the middle of my finger that is now permanently wedged at right angles. In all honesty, it has not caused too much grief swimming, and the most painful episode was the physio putting his full weight on the finger to try straightening it up. Luckily for me, he is a keen cyclist. However, I am paranoid about hitting oncoming swimmers as I was told it takes a year to self-heal. 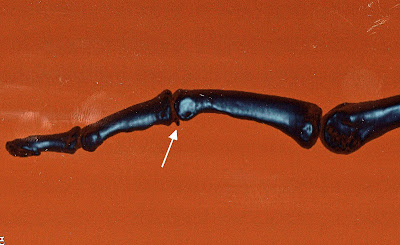 So my point of writing about this little episode is to highlight the potential for collision when swim courses are set out. Opportunities where people can swim into each other need to be avoided. I recall one swim with a T-shaped course where you had to do 180 degree turns into the oncoming traffic. The same can happen with those courses with very sharp angles, like the ones in “Y-shaped” courses, where currents can sweep you into the way of swimmers behind.
Has this ever happened to you? Let us know your thoughts?
John Bamberry
@WoJoBungo