The curse of the monolateral breather 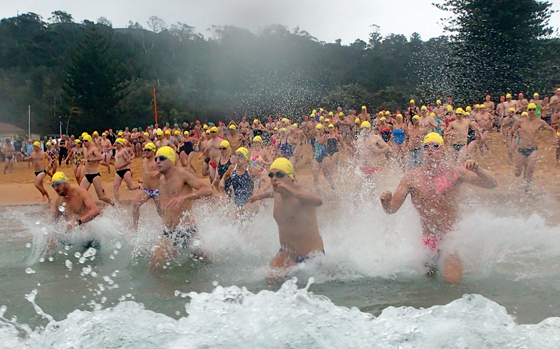 Perhaps it was because, for one of our first times, we were  mingling with the mob at the finish as a spectator rather than a swimmer, but we have never heard before so many punters whingeing about swallowing gobsful of sea water as we heard post the Bilgola Ocean Swim.

It was a blustery, bumpy day, of course. Glorious at the outset, the southerly blew through perhaps an hour prior to swim start, turning Billie beach into a sand-blasting cell. We were sitting under the registration tent. By the time we stood up, we had more sand on our heads than we had underfoot.

Out to sea, you couldn't see the booees, despite Billie organisers' best attempts. They are the masters of attaching helium balloons to the booees. The idea is that the helium balloons stand up above the booee, making the marker much easier to spot, particularly in a swell. On Sundee, however, the wind was so fierce that the helium balloons spent most of the time "sitting" on the surface of the sea. Every now and again, but, they'd bob up, just long enough to be of use to an otherwise hopelessly lost peloton. Which was just as well because you really couldn't see the booees otherwise. Not the organisers' fault, of course. They did their best. It was one of the most blustery southerly changes that we've witnessed blow through to change the personality of an ocean swim.

We're reminded of Bondi-Bronte last year - when, from our positions at the top of the park, with our cobber, Murray Cox, we watched the change come through like a curtain descending on the first act. Like South Curl Curl at the end of last season, when the change blew through as the starting waves left the beach. The swim to Freshie was essentially one reach, head first into the southerly. It was one of those swims in which we spent more time going up and down than forwards, or even backwards.

Billie was different: it was a circuit swim off the beach, so roughly half the legs would be into the southerly one way or another, whilst the other half - there were six reaches - were in some way with it, or at least across it. Organiser Cap'n Foran wisely changed the direction of the swim prior to the start, sending the mugs off anti-clockwise rather than the customary clockwise. This made the swim a little better, but perhaps not much. Mind you, we wouldn't know. We weren't out there. It was very, very blowy, and very, very bumpy. In such conditions, it's difficult to settle into a rhythm; difficult to get more than one decent stroke in succession. Into the southerly, it's just hard. The secret is to put your head down, lengthen and slow your stroke, and optimise your streamline. This will allow you to finish your stroke with an oomph and give you some push through the onrushing swell and chop until you deliver further momentum with your next grab. The optimal streamline means you will minimize the resistance through the water. 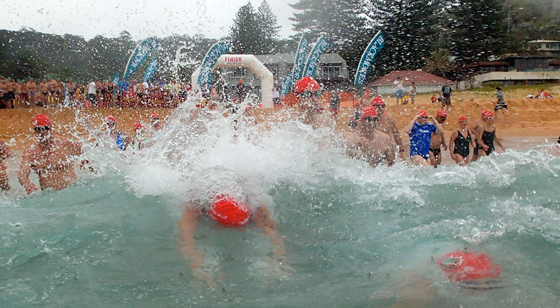 Sideways, it's different. A good streamline still will stand you in good stead, but the swell and the chop are coming at you from side-on. The difficulty then becomes one of getting clear air, as much air as you can to allow you to keep that long, slow stroke going. As soon as your air flow stops, your rhythm will stop, and so will your forward momentum.

The problem is, of course, that most punters breathe only one side, and if that side also happens to be the side from which the weather is attacking them, then every time they roll to breathe, with every breath they take, they'll take in an amount of sea water.

The causal problem is that most punters never were taught to swim proper as urchins, so they were never taught to breathe bilaterally.

Every decent swimmer should be able to breathe bilaterally: to breathe both sides. This is not to say that you should always breathe bilaterally: 3-stroke breathing, say, alternating your breath side to side. This also helps tremendously with your line. Bilateral breathing helps to neutralise your stroke defects: if you pull one way by breathing one way, then bilateral breathing will neutralise, or at least offset the damage. Interestingly, for us, anyway, many, if not most punters have different strokes according to which way they're breathing. And which arm is pulling through. For example, our right arm stroke is different when we're breathing right to when we're breathing left. It's probably true that we have four different strokes: one for pulling and breathing right, one for pulling right, breathing left, etc, etc. We know we have these different strokes, and we know that we pull to the left with some of them - ie go off course to the left - and we know we pull to the right with others. But breathing bilaterally at least will offset the damage.

But, as we say, it doesn't mean that you should breathe three-stroke or five-stroke. It means that you should be able to breathe both ways so that you have the choice. Our late mentor, Coach Sandra, once told us: "Breathe bilaterally, but breathe one way going up the pool, the other way coming back". The reason for this is that it allows us to breathe 2-stroke, which means we get more air. Some mugs need more air. We're one of them. So we generally breathe right heading up the pool, and breathe left coming back. (It also means that we always breathe away from Coach David, but that's so that Coach David can't remonstrate with us and get us to stop for a good telling off if he reckons we're doing the wrong thing. We don't like eyeballing the coach whilst we're swimming.)

It wasn't always so. We traditionally were left breathers. It wasn't until we were in our late 30s that we taught ourselves also to breathe right. It took some time, but we managed it. Indeed, every thing you try to do better and differently takes time, particularly when you're an old fart. You must simply persist. Us old farts are supposed to have a better perspective on life because we've been around longer, so we should be able to apply that longer term perspective to things such as stroke changes. Not to do so simply is lazy, physically and intellectually.

So how do we learn to breathe to an unfamiliar, unnatural side? Now, there's the question.

Some advice, we can give. When you swim to train, you have the opportunity  to work on your streamline. One of the good ways to do this - apart from doing torpedoes out from the wall - is to swim catch-up, or three-quarter catch-up, at least. It's not hard. It's all in the mind. Most people hate catch-up because they think they're going to sink. That's why they pull through early. But try this: when you're swimming along, no pressure, just you in the pool, try to swim as absolutely slowly as you can. And leave that leading arm (the one that's out in front waiting to pull through) out there just that little bit longer. One way to do that is to that is to stretch it out, deliberately, rather than pulling through as you normally would. Keep your head and neck loose, too, so that they follow the natural movement of the body. As you stretch your leading arm, a natural function also is to allow your corresponding hip - right arm leading, right hip - to drop just that little bit. Almost imperceptibly. That hip drop, however, is a key part of your rotation. As you drop your hip, your body, from the hips, will rotate, also almost imperceptibly. That rotation will bring your head around, very slightly, but enough to allow you, with your forward momentum, to take a breath. Breathing should not be a matter of throwing your head around - throwing your head around destroys your streamline - rather it should be a matter of your head rolling naturally with your body. Have a look at the good swimmers: when they breathe, their mouths actually are below the water line, but their forward momentum means the water rushes past their mouth, not into it, allowing them to breathe whilst not disrupting their streamline.

This will be easier on your natural breathing side. But stay relaxed; leave your body as loose and as supple as it can be; try very hard to swim as slowly as you can. And try that with your non-natural breathing side, too. Leave the leading hand out there, drop the hip, ever so slightly, as you stretch, allow the head to roll as your hip drops and your body rotates, and suck in that air from your unnatural side, just as you did on your dominant side. Try it with fins, if you really can't get your head around it at the start, then gradually lose the fins.

You'll have to keep at it until it starts to feel natural. But you can teach yourself to breathe bilaterally, and breathing bilaterally will help you to escape that horrible curse of the monolateral breather.
Posted by os.c at 8:24 PM