Re-run of a day a bit like this one

Thus it was today, at Dawny, on the 11th iteration of the Dawny Cockatoo Island swim, the 10th anniversary of the first inaugural Dawny’s Cockatoo Challenge… It was a day, a little bit like this one…

Quite a bit, in fact. The morning of the 1st inaugural Dawny’s Cockatoo Challenge in November 2003 was grey and damp. There was a mist over the harbour between the Dawny pool and Cockatoo Island. The kind of morning on which we’d all shun a swim in the harbour, because it looked sharky.
It was the morning after the Rugby World Cup Final at the Olympic stadium, and you could be excused – understood, at least – if you’d had a sore head. The cloud was low, on the verge of rain. It was quiet, still, no wind, and the mist seemed to hang there over Thunderbolt’s Strait, between Balmain and Cockatoo Island, and out of it could have stormed a thousand screaming Scotsmen, freeballing across the heather, their sporrans jiggling and their battleaxes a’swinging… But out of the mist instead, at the end of the 1.1km swim, sprinted Deke Zimmerman, then the usual suspect winner of many of Sydney’s ocean swim events. On that occasion, the 1.1km swim was run ahead of the 2.4km main event and you could do both.

(Randomly, we ran into Deke at Circular Quay a few weeks back: he was casually deckhanding on the river service, from which we’d just alighted. He has a beard now. He was cheerful, as usual. It was good to see him.)

On this iteration, it was grey and damp. There wasn’t a mist over the harbour, but the rain squalled through as the peloton rounded the western end of Cockatoo Island. That’s what ocean swimming… er, open water swimming on this occasion, is all about: you take all conditions in your stride, shoulder to shoulder, cheek by jowel, finger tip to cracked heel. It’s what makes our caper different from swimming in a 25m indoor pool. It was humankind against the elements: Throw at us what you will, oh Lord!, as they no doubt were shouting hallucinatorily up the road in The Hills at that very moment. We can take it.

There is something about swimming in Sydney Harbour that makes it a different experience to swims in the ocean. It's not just that it's the harbour, thus the water quality and nature are different. It's more than just that the over-riding stream of sub-consciousness whilst swimming in the harbour is focussed completely on the prospect of being taken by a bull shark. And it's not only that you're surrounded by an evocative maritime heritage and built environment blended with some of the most stunning natural topography available. In the world.

It's all those things together and more. So much more that we can't tell you. We need you to tell all of us. So, please, comment (use the link at the bottom) on your own consciousness about swimming in the harbour. What does it mean to you? What's happened to you whilst swimming in the harbour? Over in San Francisco, our cobber, Gary Emich, recently racked up his 1,000th Alcatraz swim. Swimming in San Francisco Bay also is different. A cobber at Dawny today, Susan Tutt, told us a story that she'd been told by her dad.

Susan's dad used to sail in Sydney Harbour (he worked at Garden Island). Sometimes, he'd capsize, but he reckoned there was no history at all of sailors from capsized yatchets being taken by bull sharks. Why? We thought it may have been something to do with the rigging of the yatchet -- the mast, the stays, etc -- discouraged the noahs, much like sticking cable ties on your bike helmet and making yourself look like an eejit discourages maggies in September. 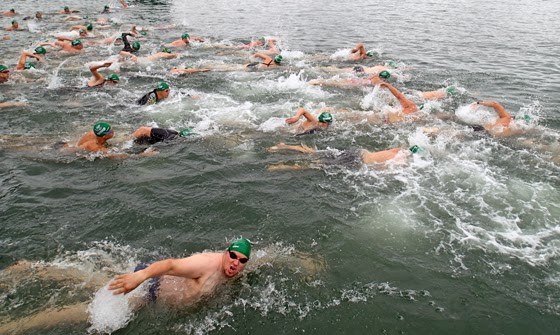 The squall we mention was just one element thrown at us during this 11th Dawny’s Cockatoo Challenge. It ran anti-clockwise, as it has the last couple of years, due to a timing issue with the ferry services into Cockatoo Island. They ran us under the wharf, in fact, which was a little hairy at high tide: it was a narrow gap under the walkway out to the wharf proper, and the stream of peloton compressed as we approached the opening. Did you know, the underside of the wharf is a mess of cables. Thank goodness it wasn’t a spring tide or a king tide. We coulda bin lectrocewted.

But through the wharf, we spread out again. It kept us close to the wall, though, so we were swimming also through the backwash from the wall, through the chop from the swim. Any second now, we thought, we’ll find out what it’s like to be sliced by an oyster. Other than when it slips in our hand whilst opening with an oyster knife. It was a Melbourne-way-of-running swim, and some swimmers, like the horses, cannot handle it.

At the end of the island, we spied the squall approaching. The leaders of the peloton were into it already, and when it hit us, a little later – for we are not leaders-of-the-peloton type of people – it blotted out our views of Drummoyne and Spectacle Island, and even much of the heritage sheds towering over us on Cockatoo Island. We crossed docks, hugged stone-stacked breakwalls, slipped by formworked wharves and wove our ways through the mess of mob swimming. Every now and again, some mug would draw up alongside, and it would spur us into trying harder, for we’d decided this was a trying harder swim for us. We stopped briefly twice to adjust our gogs, but otherwise we didn’t stop at all: not for pitchers, not fer nuthin. Cept for one, and you can see that on this page.

Eventually, we spied the final turning booee, which most of the mugs around us seemed to have missed. The brief at the start had been that we should turn right at the first turning booee, but most of these eejits just seemed to keep going along the Cockatoo Island littoral. We headed on an angle across the peloton, past the booee, and lit out across Thunderbolt’s Strait.

About half way across, something surreal happened: we found ourselves staring into our own goggles. Two orange caps had hoven up next to us, apparently putting on something of a final sprint. It spurred us on and we accelerated – all things are relative – and at one stage, we turned to breathe right, and one of them turned to breathe left, and we were so close that we could have played tonsil hockey, were that our predilection. But it was like looking into a mirror, for this character was wearing exactly the same goggles as we wear: View Fully Sicks (V200A-MR). They’re a distinctive gog, with their pale blue frame, their clear silicone straps, and their orange mirrored lenses. That’s why we call them Fully Sick. They’re very groovy. We sold some to a friend who, when she put them on, her 7-year-old son said, “Mum, they’re fully sick”. We love them. We’ve been wearing this model gog for 15 years, and they’re still perfect for us. Whilst we rave about them constantly, however, we still don’t see that many of them around (we sell them online, by the way, just in case you’d like to try them out). So it was surreal to see them staring us in the face, up close and personal.

Passing through the final bit of moored squadron of yatchets off the Dawny pool, we struck out left, a bit too far left, then had to correct, but we reached the stairs to the pontoon at the same time as this cove with the mirrored Fully Sicks. And as we entered the walkway to the shore, we remarked to each other about our gogs. And we said to him, “Where did you get them?”, expecting a response that would then lead into our sales pitch. But he said, “From you”. It’s good to know that the sales pitch works sometimes.

A bit of a footnote: one of the sponsors of the Dawny swim is Balmain Sports Medicine, a bunch of youngsters of allied disciplines led by James Sutherland, our physio by appointment (if you can get an appointment to see him), accompanied by Aaron Pigeon, our masseur by appointment (easier to get an appointment to see Aaron), et al. It was good to see James, Aaron and various of their professional cobbers do the swim, too. The trouble is they’re all such fit looking characters. They make us feel inadequate.

Another lovely morn on the boardwalk in the rain. 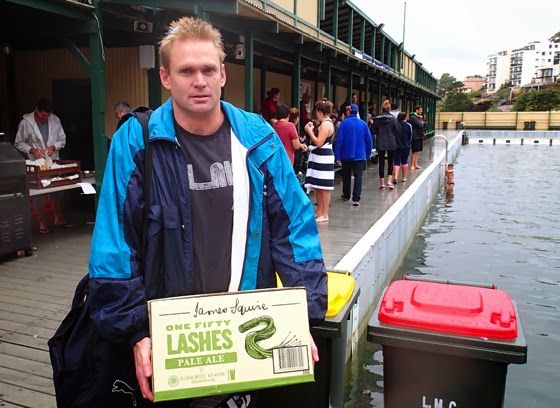 Real footnote: There was a bit of an incident in the laydees' showers at the Dawny pool afterwards when a young lass who doesn’t carry much in the way of insulation was being treated by her mother for hypothermia: mum had her under the hottest shower she could draw from the change room taps. Luckily, Mrs Sparkle, a registered nurse, and her cobber, Judy Playfair, a teacher also with a deal of commonsense, happened by and influenced the treatment. Mum resisted; thought she knew best.

Rather than throw an hypothermia sufferer under a scalding shower (we learnt the folly of this when we did it to ourselves in mid-winter Victoria once), the sufferer must be re-warmed slowly. Dry them, remove them from wind, rain, etc, wrap them in warm stuff, eg blankets, space blanket, dry clothes, a sleeping bag, shower them (without the blankets and clothes) in a lukewarm shower, warming gently. Feed them warm, sweet drinks. Warm them slowly and gently. No direct high or sudden heat.