What do you do when the swims are washed out? 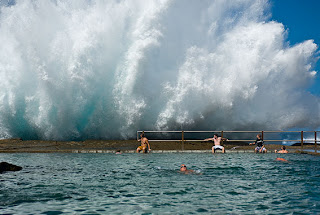 The two main swims around Sydney over the weekend -- North Steyne and Avoca -- were called off due to the seas, but Nowra went ahead with an amended course. We're told there was lots of weed but it was a nice swim with 37 punters.

North Steyne are mulling an alternative date; Avoca have rescheduled to April 26, making that Sunday a very busy day, with South Curl Curl-Freshwater and Coogee-Bondi also scheduled for that day. 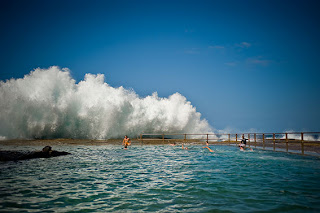 Hervey Bay happened in Queensland, above the rain and storm line, with a record 170 starters. They had a lovely day, by all accounts.

But what did you get up to on a washed out Sunday, which turned out to be a very nice day in Sydney? We had a social engagement at North Curl Curl, so os.c and Glistening Dave went for a frolick in the North Curly rockpool. We did laps whilst Dave took pitchers of the seas crashing onto the rocks and into the pool. Watch for some pics very soon. Then we celebrated Tacoma Jim's birthday, and his mum's birthday -- Jim's mum, G-L-O-R-I-A ... GLOOOOORIA! -- has been visiting from, well, Tacoma, and heads back there later this week. Her birthday is Monday, April 6. 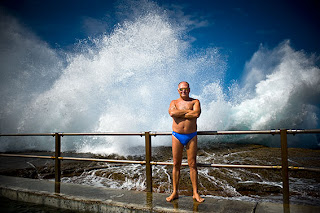