The 3 Points Challenge at North Curl Curl is one of those rare events when two sports of different culchas meet -- ocean swimmers and triathletes, or, more correctly, aquathletes, since there are just swim and run legs. They are different culchas, one epitomised by paunchy bellies, budgies and swim caps, the other by bright, colourful uniforms with sponsors signage plastered all over their nether regions, and grim faces. One thing we will say for aquathlon is the running rips the weight off you much quicker than swimming, and the grim, taut smiles on the aquathletes faces testify to this: gaunt, boney, whippets, they are. Unlike all us middle-aged mugs who wallow in the sea until we're washed back in by the surf. 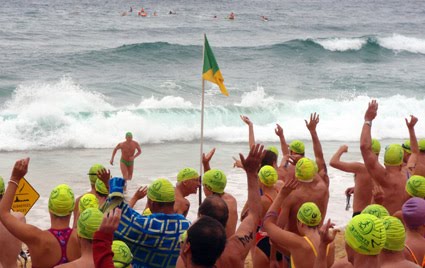 Will we or won't we? The show of hands went up when os.c spotted two blueys in the break near the starting line at North Curly, prompting this spontaneous act of democracy.


Another thing we can say, however, is that ocean swimmers, as a race, human race, swim better than aquathletes/triathletes, many of whom appear lost without their wetties. But they run better than us, those of us who do run, who ain't many of us. The other source of smugness we take is that it costs much less to get into ocean swimming than it does into aquathlon/triathlon: they have to spend thousands to equip themselves, so they must take themselves very, very seriously, indeed. And, in the end, when their knees give in, their shoulders give up, their hips are into the second replacements, they will come to ocean swimming, which is much kinder on the ageing body than the constant jarring and muscle tightening of the road sports. 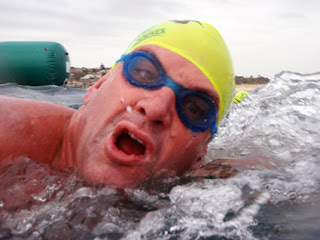 Killer's Wingman, Paul Mitchell, came down from Murwillumbah for the V8 Rockapes at Homebush Bay, er, the 3 Points Challenge at North Curly. Just goes to show: anyone can do this sport. Wingman and Killer have a personal trainer known as "The Cockatoo", for his hairstyle. (If this is not the Wingman, we apologise. Looks like him, though.)


It was a lovely day at North Curly. We were alarmed when we spotted two blueys mooching about in the break right on the shore by the starting line, but there was nothing out the back or around behind the headland, apart from clean, bumpy water.

Not hard to see why this event zooms up in numbers each year: the aquathlon part of it is unusual, with the run interspersed with three short swims, and now the ocean swim takes us north around the headland towards DY: not just another circuit on a familiar beach. 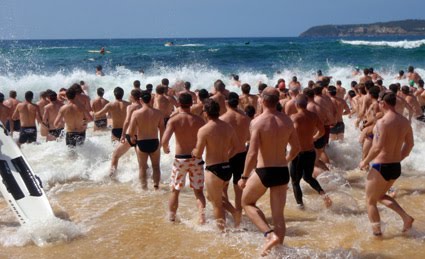 Where do they get all these characters? And this is just the Prepubescent Boofheads Wave in the 3 Points Challenge. The real Boofheads - Killer's wave - was still to come, not to mention the Fragrant Wave.
Posted by os.c at 1:21 PM