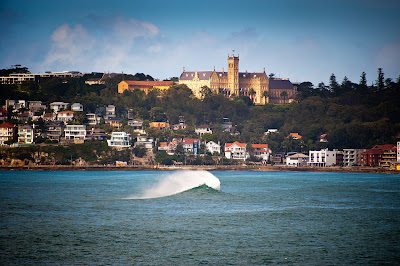 South Curl Curl, Byron Bay... they herald the start of winter swimming season. All around the coast, clubs with names like Icebergs, Splashers, Mackerals, Frigid Frogs got going this weekend in the winter swimming season, many of them at beach pools on beaches which, until now, have been the scene of ocean swims. The Byron Bay swim has been held on the first Sunday in May because, traditionally, that's the start of winter swimming (it's nothing to do with the Labour Day holiday in Queensland). Now South Curly is building a similar tradition, although their timing has been more to do with finding an empty Sundee in Sydney.

And what a weekend! South Curly deserves credit for the courage they showed in going ahead with the swell as it was on their own beach. Curly is gnarly in any kind of swell, but when it gets up, it is one of the most dangerous beaches on the coast. So it was moved to Freshwater, next door, and what a lovely swim it was. Some very big swells rolling through, but the rip ripped us out to the gates, and it wasn't too difficult getting back. Ended up at 1.47km, with a couple of hundred of metres of that running into the sea.

The swell was from the east, which means Byron would not have had the protection it normally has from difficult seas, which usually roll in from the sou'-east. Port Macquarie switched their course into the Hastings River.