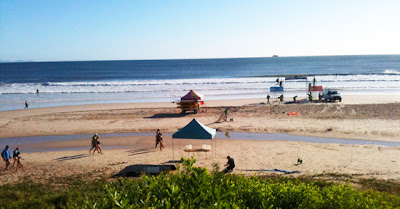 I wasn’t there for the Blues festival, but I had the blues after the Byron Bay swim this year.
My third time and worst result. I did an awful 14 minutes slower than last year . I barely beat five other women in my age group.
Why why why?
It has been two months since my last event – the Pier to Perignon from Sorrento to Portsea. But I swam that event faster than Byron, despite the course being more than twice as long.
And I know conditions were not favourable at Byron this year. Everyone seemed to pull up slower times and the local paper reported that there was heavy chop around the point and a blustery offshore wind made it hard going in the home straight.
The home straight? The whole way if you ask me. I didn’t find it particularly hard to get out, but once around the point it was a slog the whole way home. There was a decent swell, which meant visibility was tricky. The pines of the surf club were even hard to spot. So I made the mistake of following some guys in front of me and they led my astray. We ended up to the left of either the fourth or fifth buoy and the lifeguards were sternly pointing us back to the buoy, about 50 metres to my right. I briefly considered not swimming around it, but I would only have been cheating myself wouldn’t I. Every time I lifted my head for a look for the finish, I seemed to cop a mouthful of salty water. By the time the finish line loomed I was sick of it. Sick of swimming, sick of stroking, sick of not being there yet. Finally I stood up when everyone else did, and was promptly dumped by a massive wave – a 360 degree forward roll dumping that filled my bathers and my nose with sand. When I finally got to check my watch there wasn’t much time left under the hour. Truly uninspiring.
And while I’m at it, the t-shirt was awful. Purple with all the sponsors’ names on the front. I totally understand the importance of sponsors but unless they swim with me, their names should be on the back.
There were some good things about the event. I got to meet the lovely and talented Seppo (Michelle from Brisbane) who won a place in her age group. I got to meet some Peninsula Pirates, who have been intimidating me for years in Bay swims, and I discovered they are not so scary out of the water.
And the rain that had dogged our visit to Byron finally stopped and we had blue skies for the swim.
But I must say I enjoyed the two pre race day swims with the locals much more than the actual event. On Friday and Saturday we met them on the deck at the club. A bunch of fit looking veterans, mainly men, led the walk down to the other end of the beach and then the swim back to the club. Lovely. Particularly on Saturday when we swam towards a complete rainbow. That was my swim highlight.
I have to come back next year. Pride demands it. I can do better.
That’s it for me this year. I’m off to the pool to work on my technique. But I’ll be back for the Brighton swim when the weather warms up again. See you in the water.
Posted by KAOSVIC at 7:42 PM