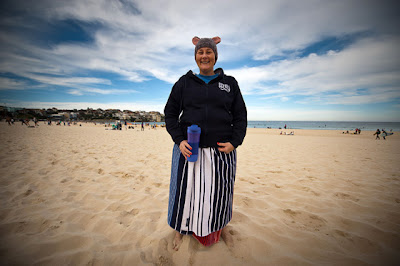 Two different swims over two days -- Sat'dee, the Noosa swim, then Sundee, the 2nd Inaugural Bondi Bluewater Challenge. Smooth water with slight offshore breezes at both, but very different in setting and water.

Noosa's water was muddy. Indeed, when we swam on the Fridee, literally you couldn't see the hand in front of your face. It was slightly clearer on race day, but not by much. They've had a lot of rain up there, and it washes out through the river and in run-off. But we had a lovely couple of days staying with friends. We've done this swim four times now, and we've always struck murky water. It's not dirty or polluted, just cloudy, murky. They tell us it was perfect last year, but we missed it. But for a Sydneysider coming out of the cold that's been Sydney the last week or two, it was reassuring to exit the plane at Maroochydore into such balmy, near summer temperatures. Rained a lot, especially overnight, but the setting at Noosa is idyllic, with the national park forming a backdrop to the swim which, despite the murk, was run in very good water.

Main swim was 2.48km, according to the oceanswims.com GPS-in-plastic bag, not 2km as advertised, but there's nothing wrong with that. We like a bit of extra distance. The booees were set very far out to sea.

Then Sundee at Bondi... Cooler, urban backdrop, smooth water still which was clear through the break, but murky once you moved out to sea, not a muddy murk, just a white, opaque murk. Nothing unpleasant about it out there. It just wasn't clear, although we did see the stark white float of the shark net marker hovering a couple of metres below the surface just past the far out turner off Mackenzies Point. It seemed like farther than the advertised 2.1km, but the GPS on Mrs Sparkle's back told us it was absolutely spot on 2km.

A triffic thing they did at Bondi was to award little prizes to what swim spirit Cyril Baldock referred to as "the average swimmer" in each age group -- the average time. What they did was to take the swimmer in the middle of the age group, say 15th out of 30 swimmers in the age group, and give them a prize, too. If that swimmer wasn't present, then Cyril read down the list until they got someone who was there. It wasn't really the "average" swimmer, more the median swimmer. But the difference is immaterial. The gesture recognised the rank and file. "We want this swim to be the swimmers' swim," Cyril told the mob over the electric microphone. Indeed. We applaud the move.

A melancholic feel at the end of the day. We have two more swims in NSW -- at Evans Head on the June long weekend and Mona Vale on June 26 -- and Queensland has the 3.8km Caloundra swim next weekend. But the season now is as good as over. Noice to have life a bit easier, but sad to miss the good times over the past eight months.