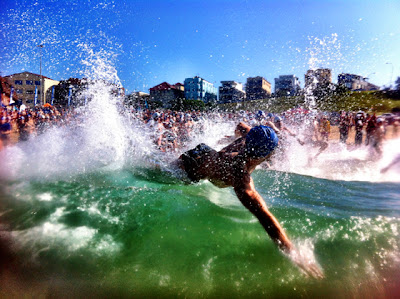 We did a terrible thing at North Bondi - we drag-raced an 82-year-old. It wasn't just any 82-year-old, mind you. It was John Kelso, whom we reckon is perhaps the world's best ocean swimmer. To be swimming as fast and as regular as Kelso does at his age truly is phenomenal.

Anyway, when we turned the close in booee off the Icebergs at Bondi, we stopped, took some pitchers, mooched around, shot some video, then set off back up to the finish at North Bondi. Shortly after we began swimming, we saw out of the corner of our eye, a yellow-cap hoving into view to our left and behind. No idea whom it was, but we noticed this yellow-cap was gaining on us quite easily. They also seemed to be sitting pretty close behind us, and the thought flitted across our minds that perhaps they were trying to draft on us; to heel-waft. The impertinence, we thought. No-one's ever tried to heel-waft us, with good reason. We remember at Byron Bay a few years back when our idiosyncratic cobber, Killer, boasted around the pub post-swim that someone had drafted on him. He was so proud...

Anyway, they weren't trying to draft on us, and they weren't really swimming behind us. They were minding their own business. We had no idea whom it was, but we could tell they were a bit older, slight of build, and, as they drew closer, we realised they were goggless. And we realised suddenly whom it was: John Kelso. Kelso swims pretty well every week, is one of the faster swimmers on the Sydney circuit in terms of deciles, and rarely wears goggles. We were just ambling along ourselves, at our normal cruising pace, but we thought, this was a great opportunity to watch him closely to try to discern his secret. What is it about Kelso's swimming that makes him, at 82, so fast.

Anyway, we picked up the pace a bit, and we ended up drag-racing Kelso all the way back to the final turning booee off North Bondi, where we stopped again to take pitchers. Along the way, sometimes Kelso was in front, sometimes we were in front. He wasn't racing us; and we weren't really racing him; but we were sticking with him to watch, and to learn. And it was more a case of us keeping up with him rather than swapping the lead, and when we pulled ahead momentarily, it was because we ran into a wall of breaststrokers whom we had to split to get around, or because Kelso ran into one of those North Bondi water safety laddies who sit with their rescue boards across the course, which means the peloton must split widely to get around them.

So what did we learn? Not a lot. We watched his stroke all the way along that 1km reach, particularly the underwater stuff, and there didn't seem anything particularly perfect about it. We thought he could have kept his elbows a bit higher, and his grab could be a bit more effective, and his pull through was nothing to write home about... For a bloke who carries no weight at all, he floated quite well, although his legs were down a bit. But what did strike us was that Kelso seemed relaxed. At 82 and with a wiry frame, it's hard to look relaxed, let alone be relaxed. As you get older, the body tightens. The best swimming, of course, is the slowest, most relaxed swimming. Try it yourself in a a pool. Go flat out and time yourself. Then do the same distance as slow and as relaxed as you can, and you'll probably find there's not that much difference between your times.

But tell us about your swims this weekend... North Bondi, Geelong, Phillip Island, wherever...
Posted by os.c at 3:50 PM