Magic at Malabar, bubbly in the Bay 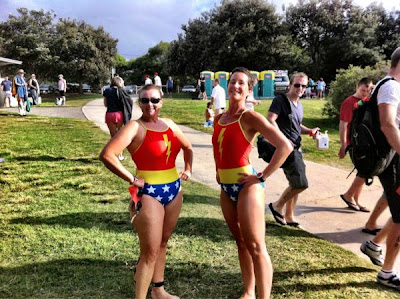 This is becoming exhausting... It's that part of the season after all The Big Ones, but there are so many swims on, quite largish ones, that it's exhausting keeping up with them. That may be due partly to the party we had after Malabar today, celebrating the birthday's of our staff photo drunk, Glistening Dave, and Rotto-bound transformer, RealDeal_Cat. Dave turned 60 yesterday and today was his first outing in the sub-Codger age group. It wasn't a milestone birthday for Cat, but this was her last swim in Sydney before heading to Perf for Rottnest next weekend, where she's swimming as part of the Tweetybirds quad team, four laydee swimmers who know each other largely only through Twitter. That's Cat above, on the left, with sibling Tweetybird Liz Hill (@SwimBikeKnit).

Heard good reports from the Pier to Perignon, which is one of the glorious swims on the calendar. So sad we couldn't be there ourselves. And Malabar, while a little mucky in close, was such clear water from 150m off the beach, although some punters reported some lice, and one even tweeted that he'd been stung by a bluey. Musta been the only bluey in the bay.

We'll have our report up tomorrow. In the meantime, our swimmer feedback surveys are open for both those swims... Pier to Perignon... Malabar... We shot some video and plan to post an essay on different strokes, also tomorrow. Provided that blob we discovered on the outside of the lens wasn't there all day.