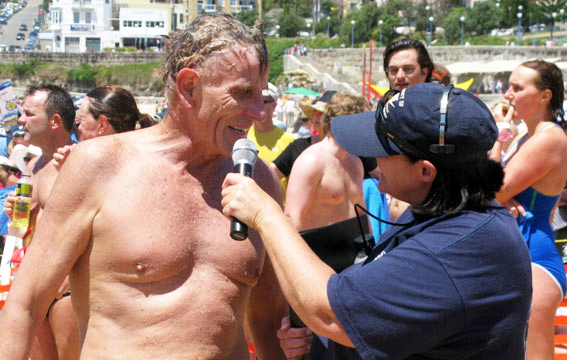 Good to hear that the The Rainbow Club, who run the Malabar Magic swim in Sydney on the 3rd Sundee in February, will rename the event the Murray Rose Malabar Magic, after their patron and swim organiser who died last Sundee.

Murray was no longer a young bloke -- 73 -- but that doesn't make his loss any easier. We were one of that generation who grew up revering Murray Rose. His celebrity from the mid-50s was all-embracing, and it proved to be enduring because it was based on substance of character. He was no passing, sporting fad. He was every boy's role model, a man with dignity, bearing, a grace, a presence that inspired respect and admiration, and he remained himself throughout those years of adulation. When we were littlies in the '50s in Newcastle, we never dreamt that, one day, we'd meet Murray Rose, that we'd come to know him and to regard him as a friend. One of the glories of life, for us, was that that's what happened.

Murray was a very private fellow. He'd suffered for a year or so with a troublesome foot that had interfered with his swimming and his capacity to get about comfortably. When he received his diagnosis of leukaemia around the beginning of this year, he set about carefully making arrangements, but discreetly. He called us and asked us to remove reference to him leading this year's tour to the Dardanelles in August. He wouldn't tell us why, apart from saying he wasn't well. When we altered one section of the website but we'd neglected also to amend the downloadable information document, Murray called back and drew our attention to it. "I won't be going to the Dardanelles," Murray told us. "And I won't be at the Malabar Magic, either." That's what alarmed us. At that point, the Malabar Magic was only a couple of weeks away, yet he already knew that he couldn't be there. 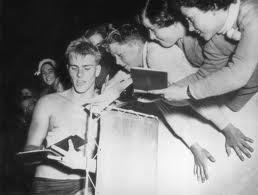 We heard he also headed down, about that time, to North Bondi surf club, where he was a member, and cleared out his locker. He swam regularly from North Bondi, several times a week, point to point, with cobbers.

We -- by "we", we mean "us more mature Australians" -- we won't need awards to remember Murray Rose, but it will help our kids and their kids to know of Murray and the contribution he made to us all, by his achievements and by his example. A lot of younger swimmers may not have heard of Murray, or may not appreciate the role he played in Stra'an swimming. We recall a story Murray told of a swim a few years back. Murray entered this swim online (not through oceanswims.com), and the organisers, apparently not knowing him, figured he was a lady who'd entered his name the wrong way around. So they changed him from Murray Rose, in the Male Codgers division, to Rose Murray, a lady. Murray said later, "I won both the Male and Female divisions that day". 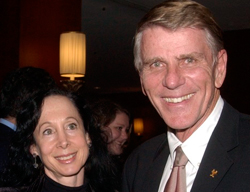 A wonderful, wonderful man of grace, style, culture and substance. Our thoughts are with Murray's wife, Jodi, and their son, Trevor.

The best piece we read about Murray in the meeja over the past few days -- there's been an awful lot of dashed-off guff -- was the Herald's obituary, run on Tuesday, April 17. But while it stood out from the other pieces we read, it still skated all too glibly over that vast bulk of Murray's life between his swimming career and his return to Australia in 1994. Apart from his swimming, Murray had a career in TV in the US and played roles in a couple of movies. He also was a senior marketing executive (we thought he'd been Marketing Director) of the LA Lakers, one of the two biggest sporting franchises in the world (the other being Manchester United). Maybe someone, one day, will write a definitive piece. For the Herald's obit... click here

We ran a story in our email newsletter when we knew Murray wasn't well, indeed was seriously unwell, but it wasn't for us to announce this to the world. We just reckon all Australians should know how wonderful a person Murray was. A bit out of left field, perhaps, but it's not surprising that Murray married a ballerina. He was, as they say, a fine style of a bloke.

(A version of this story appeared in our email newsletter of Thursday, April 19. We've had a few responses to it, so we figured we should post it as a blob, too, so that y'all can have your say, too. If you want to add your thoughts, click the Comments link, below.)
Posted by os.c at 8:53 AM